Posted from Diigo. The rest of my favorite links are here.
at January 31, 2009 No comments:


Posted from Diigo. The rest of my favorite links are here.
at January 29, 2009 No comments:

Dear reader please be advised only click on the above link if you are over 18 and not of a nature to be shocked by nudity!


Posted from Diigo. The rest of my favorite links are here.
at January 28, 2009 No comments:


Posted from Diigo. The rest of my favorite links are here.
at January 27, 2009 No comments:

Apologies for this awful post from Monday 26th January - it was posted form the Eeepc and appears to have become a bit garbled!
The post was related to the gradual rise and rise of Twitter and related to 2 BBC News items extolling the virtue of Twitter :
Stephen Fry's interview outside the BBC prior to ( or after) his appearance on the now returned Jonathan 'Wossy' Ross. It was discussed briefly in the programme but not being a fan of Ross I will avoid posting that entry.... Twitter is growing in its usage in the UK.
While it also has impact in the US following major news stories which were 'reported first by 'citizen journalists using Twitter and Twitpic.
The BBC appear very keen on Twitter I guess no surprise when keeping a close eye on Twitter feeds can point to a rising news story amongst the chaff!


Posted from Diigo. The rest of my favorite links are here.
at January 23, 2009 No comments:

I just happened to be in a Comet electronics store today rummaging for bargains (looking for a good quality widescreen monitor today) when I caught a conversation between a store salesman and a couple looking at netbooks this is the part of the conversation I heard.......

"(man)Which system should we go for then?
(salesman) I would go for the XP version that is newer, that Linux is an older type you won't want that, better go for the XP one.
(man and woman) OK, we prefer the newer XP we'll have that then please"

I just wonder who trains these people...... and why windows is seen as good?

The battle of the swivel headed touchscreen notepads 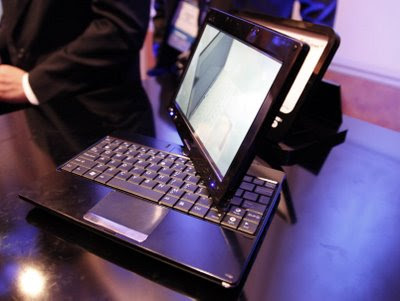 ( image from http://i.gizmodo.com/5124948/asus-t91-your-1+inch-thick-convertible-eee-pc)
With the unveiling of the new Asus T91 swivel screen touchpad mini notepad (no price as yet!)at the  Consumer Electronics Show last week I sense a new benchmark appearing for mini netbooks for 2009. The battle ground  in UK schools will be joined by the Intel Classmate with an in school price of around £260.
Both use the battery saving intel atom chip.
The T91 :

The T91 comes with a swiveling 8.9″ touch screen monitor. It runs an Intel Atom Z520 processor with 1 GB of RAM built in. Asus built both solid state and hard drives into the T91 for a combined capacity of 52 GB.

Asus also included a few first-ever features in the T91. The netbook will be the first to offer both GPS and a TV tuner card built in.

The T91 will ship running Windows XP home and is expected to support Windows 7 once it’s released. Asus has stated that a Linux version is possible, but has not said definitively whether it will offer a Linux version. (tech.blorge.com) 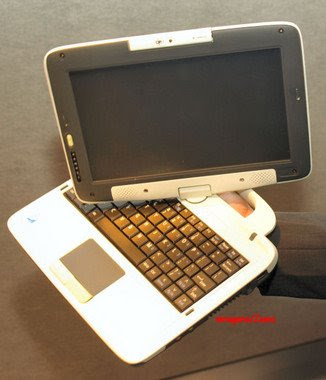 CONVERTIBLE CLASSMATE AT A GLANCE
Screen swivels 180 degrees
Touch screen
Water-resistant keyboard
Built-in rotating camera
Rugged outer case
60GB hard-drive
512MB memory
Pre-loaded software
Source BBC Technology
The classmate as you would expect looks to be more robust and will stand up well to a hard life in the classroom, while the Asus is an unknown quantity on that score - however previous Asus models have been a hit with both teachers and kids.... let battle commence
at January 16, 2009 No comments:

Bonfire of the Vanities

The quote comes from the burning of seditious literature by Savonarola in 1497 but has come to represent to destruction of material by those who are supposedly our betters. What is happening in 2009 sounds a little more like the goings on of the Borgia's.
In the current financial situation globally it is only to be expected that many companies will revert to their core business and also kill off competitor products in the classic method - buy and instead of funding allow to wither on the vine.
Some quite well known web 2.0 tools have become victims over the past 2 months.

Pownce first appeared in June 2007 as something which offered more than the already existing and ultra basic Twitter ( August 2006) this is how Pownce glowed brightly and was all to quickly snuffed out (from Wikipedia) :

Its launch, on June 27, 2007, was covered by outlets like Wired,[5] Business Week,[6] Webware,[7][8] and the San Francisco Chronicle,[9]with most of the coverage focusing on Rose, known for his involvement in Digg, Revision3 and TechTV. Due to this media exposure, invitations for Pownce were in high demand and were being sold on sites such as eBay.[6]

On October 30, 2007, Pownce launched their public API.[10] The developers have also created a Pownce API Google Group . Originally, it was primarily for discussing the release of the API, but it now serves to gather feedback and help developers.

On December 20, 2007 Pownce launched a mobile version of their service.[12] This version can be accessed from a variety of mobile devices at m.pownce.com.

On December 1st, 2008, Pownce announced they were shutting down .

We have some very big news today at Pownce. We will be closing the service and Mike and I, along with the Pownce technology, have joined Six Apart, the company behind such great blogging software as Movable Type, TypePad and Vox. We’re bittersweet about shutting down the service but we believe we’ll come back with something much better in 2009. We love the Pownce community and we will miss you all.

The story of Pownce is one that I think we will have to get used to as Web 2.0 meets the real world, products need to 'turn a buck' or be put out of their misery. I don't think that this will put off web developers from coming up with the next big thing. The problem with this is that consolidation by the industry narrows the choice for consumers - take the rise and rise of :

From a slow start where to utter the phrase 'to tweet' was a peculiar code understood by a narrow group of semi-geeks,  now two and a half years on where most events in the world -from  terrorist attack in Mumbai to plane crashes in the USA are said to be first reported by 'citizen journalists' via Twitter..... it is becoming the known face of micro blogging ( and possibly an acquisition prospect by the owners of Blogger itself - all these double letters!!! 'oo' hence the death of Jaiku).
This is great for the process of micro blogging and also for growing the community, however we have to be careful that this does not spell death or more 'withering' for applications such as Plurk ( never really got it myself!!) Yammer ( great for setting up micro blogging within an organisation/school - a walled garden) or Edmodo another protected micro blogging area designed for education (  championed by Jose Picardo).
Is this shake out of web 2.0 tools a bad thing? Not necessarily as there are still developers out there searching for a new solution to  problems that we don't know that we have, also shouldn't the strongest survive?
My answer is yes the strongest should survive, it is just a shame but inevitable that an applications 'strength' is going to be decided in the present climate, in the boardroom of the big fish in the pond....... taking care that smaller fish don't grow too big for their own good......welcome to the real world. I wonder what the rest of the year has in store for social networking sites ( watch out for the big fish circling the pond!!!)


Posted from Diigo. The rest of my favorite links are here.
at January 14, 2009 No comments:

The android market for the G1 smartphone has now begun to really gain pace. Last week a Skype beta client arrived and looks good apart from the fact that calls automatically use Skype credits ( I guess without a computer this has to be so - still a cheap option.Today a blogger client allowing direct blogging via the keyboard. It looks good for posting thoughts, sadly no photo upload, tagging or hyperlinking facility......yet.
Tags and labels and photo's can be added later in editing.
at January 13, 2009 1 comment:

Time for new form of education?


Thanks to Alice Barr for this link form her The view from my window blog.
On viewing it seems to say what many of us within education have been saying for quite a while now .... the current education system has failed you, however I do wonder quite what the education system can do to address this - it is a little bit like trying to stop a supertanker.... I feel like a tiny tug which has tried to nudge education in the right direction and I guess that the rest of the edublogger community has been doing the same, but I don't see a change of course as yet?
at January 13, 2009 2 comments: 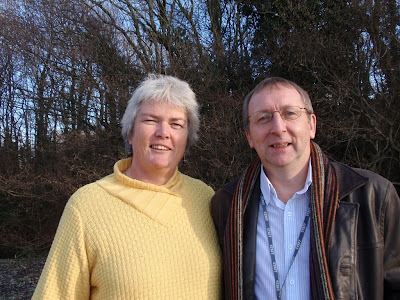 For the first time since 2 classes 13,000 miles apart in 2 different hemispheres began to communicate with each other via podcasts and blogs in October 2006, the 2 instigators of this link actually met. Above is yours truly with Miss Allanah King and below are the pair at a chilly ( you might just be able to tell!! yes it is a chunk of ice that Allanah is holding and it did snow......just!) Caerphilly Castle. 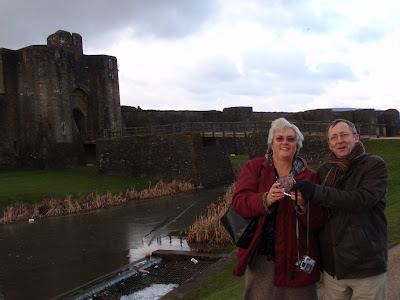 Allanah arrived by train in Abergavenny on Saturday 3rd January 2009 and left with TriciaS (Twitter) for Leicester all too soon on Tuesday 6th January en route for London and on then to Londonderry. Allanah will be departing the UK on Wednesday 14th January and will visit NZChrissy ( Skype) in Bangkok before heading back to Nelson and school.
at January 10, 2009 2 comments:


Posted from Diigo. The rest of my favorite links are here.
at January 06, 2009 No comments:

Cefn Fforest
Originally uploaded by allanah_k
On Monday 5th January 2009, Allanah King and Mini-Dylan came to visit the pupils from Cefn Fforest Primary who had begun the conversation with their friends 13,000 miles away at Appleby School, Nelson New Zealand in October 2006.
It was a chance to actually say hello face to face rather than over a skype line with 11 hours difference between each other - actually to meet in the same time zone was fantastic.
Cuddly Kiwi who has many adventures since arriving back in 2006 and has been much loved was handed back to Miss King for his journey back home - we hope to keep up with him when he returns to the classroom in February...... in New Zealand.
After a good walk around the school looking at the excellent displays Miss King and Mr Harrington left on their journey to Caerphilly Castle where it snowed!
at January 05, 2009 No comments: