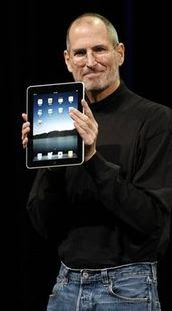 The much anticipated Apple tablet the iPad arrived today. My first impression was, 'why is Mr Jobs holding that XXL iPhone?' Of course we are all aware of Apple's ability to watch a market (mp3 players, cell phones... and now tablet PC's) and then enter with the killer must have machine which re defines the market. On this occasion they may have done this again, however I was not convinced prior to the iPad's arrival and now having seen it and read the specs at TechCrunch I still remain unconvinced, it is a XXL iPhone!
I am not aware of the tablet market being that huge as yet ..... does this device help this grow? E-Readers have been gaining ground of late, however I still believe to a niche market ...... am I old fashioned, I prefer a book? The iPad may see them off ...... although they still compete on price and straight usability.
The iPad is of course an Apple machine and as such is locked to Apple software and I believe would need to be hacked to run something like Google Chrome, it also lacks a card reader ( even my TV has one of these!) and a USB much as the MacAir. There is the whole 3G contract issue ( there will be a wi fi only iPad first) for contacting to the web on the move. The screen size is a bit on the small side.
Battery life looks good as of course the device does with its lineage. However I believe that this machine is only a step along the way to where computing needs to go - things such as seamless user interfaces that can be controlled by hand gestures not a touch screen.
I see people with an iPad being a little self conscious of those looking!
I hope to see one of these in the flesh soon and will then truly be able to give a full report. I can't see this tech geek getting one anytime soon............. however they are pretty! 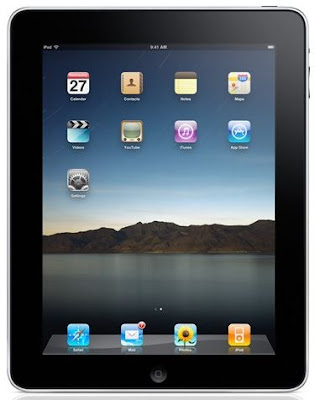 Update 28 01 2010 - it is sad when I here people say I will buy the next generation machine......why oh, why can't companies like Apple bring out the finished article at their first attempt? I am sure that this machine has been discussed and discussed at Apple and yet they have still produced a big iPhone without a camera that you cannot fit in your pocket!
Apparently it was unfortunately being called the 'iTampax' on Twitter yesterday... sad but true!
at January 27, 2010 1 comment:

Email ThisBlogThis!Share to TwitterShare to FacebookShare to Pinterest
Labels: iPad

I really like the idea of this clock it very much reminds me of the Mr Jones Cyclops watch that I really wanted for Christmas. 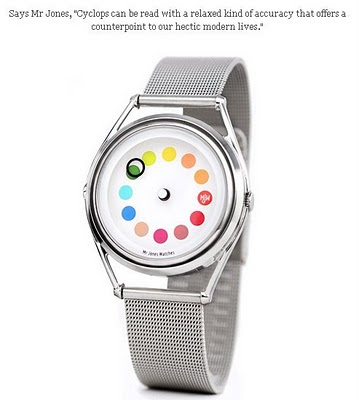 Email ThisBlogThis!Share to TwitterShare to FacebookShare to Pinterest
Labels: BETT2010


As many UK teachers prepare to head to the BETT2010 Show at Olympia in London I happened upon the video above delivered by Pranav Mistry at TED India late last year.
Pranav was showing the 'Sixth Sense' device which appears to offer cheap(er) devices allowing us to interact with the world around us. I was particularly struck by the paper based laptop which uses the microphone from a webcam attached to the paper to act as the receiver and the webcam to fix the image this is then projected onto the paper as a functional laptop and gaming device ( watch the driving game on the paper laptop!).
My mention of the BETT Show is that even though it does promote the innovative use of simple technology by teachers in the UK this is sadly swallowed in the horribly over the top commercialisation of the main show halls - I rather feel that Pranav would be pushed to the side by the likes of Promethian and Smart and MS with their new and expensive 'Interactive Table' ( unless there was a market and they could then push product).
There is a need in the UK for a series of conferences perhaps at the NCSL in Nottingham and other venues for the specific promotion of simple technology to schools - I know that this has been attempted by NAACE however I think there is the need now to develop this from grassroots teachers similar to the Isle of Wight conference organised by Joe Dale.... come on BETT it is time to evolve!
at January 12, 2010 No comments:

At least for the first month of the Flickr365 Challenge - a challenge to post one picture to the web a day and my decision also to post a daily to a blog set up for the purpose, it is likely that my posts to Ddraig Goch will be somewhat sporadic. I hope that as I get into the routine of daily blog posts I may once again find the time and content to blog here...... however no promises!
One thing which is giving me thoughts about blogging is my lacklustre decision to book for the BETT2010 Show at Olympia later this month. Having had the opportunity to visit the ISTE NECC Conference in 2008 (here for 2010) which I found to be a marvellously organised event where educators spend the majority of their time at seminars or keynotes and much less time visiting show stands. I am of the opinion that the BETT Show in London concentrates too much on the 'show' and commercial content, I realise that it is a free show, however if it did have a fee it may actually be able to shake off the commercial shackles that appear to bind it and become a seminar/keynote driven event which I think may actually be more appreciated by attendees?...... Discuss.
at January 03, 2010 2 comments:

With regard to washing machine repair mentioned in my new Ddraig Goch 365 blog. There were 2x 10p and 1x 1p stuck inside - as a result we saved a £40 repair engineer callout fee and made 21pence into the bargain! !!!

I am going to attempt to blog daily throughout 2010 on a new blog - Ddraig Goch 365 - I do caution that it is unlikely with my track record of being involved in projects like this that I will actually manage to last until the end of the week let alone the whole year..... but here goes. Blog post 01 01 2010.
I also caution that the blog is likely to be quite boring ( I am stuck with my prose style - I dearly envy those who are gifted word smiths however I do not count myself as one of these talents!) so don't worry if you fail to stay with it ...... I may even bore myself into submission, it may also cure me of my Web2.0 addiction as a form of aversion therapy?
at January 01, 2010 No comments: