What a night to just happen to be in NYC? 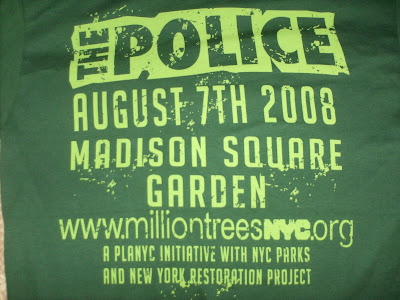 Celebrating our Silver Wedding Anniversary and Deb's 18th birthday (ha!) in New York, we happened to be sitting having lunch watching a rolling advertising hoarding on the side of the Radio City Music Hall, when up came an advert for The Police at Madison Square Garden on Thursday night...... having followed the band as I have others on and off over the years, and as we are on holiday, I thought let's go for it. I had to follow the tricky route of acquiring last minute tickets for what is possibly the band's last ever performance. Thanks to a site called StubHub ( recommended if you are ever in this position) I managed to acquire 2 tickets in a reasonable spot for the first gig I have been to since Queen at the NEC in 1979!!!!And boy what a gig it was.
First the poor B52's tried to wow the crowd,who joined in reluctantly at first, but gradually warmed to things as the numbers in the arena grew to its predicted 19,000.The B52's did an hour set.
But were followed by the fab 3 who started spectacularly with 'Message in a Bottle' back by the drums of the NYPD just watch this for the start of a concert!( thanks to TheSchemer among others for the Youtube links)The guys actually did over 2 1/4 hours on stage, I guess largely on adrenaline.The audience did their very best to raise the roof off 'The Garden', sting had his beard theatrically shaved off and .....at the very end the fat lady did actually sing.
Thank you for a great night Andy, Stewart and 'Master of Ceremonies' Sting, it was brilliant and great to be able to say..... we were there.
The Police
at August 08, 2008 3 comments:

Del.icio.us has just been updated to Version 2.0 - url, delicious.com make sure that your firewall recognises it and doesn't block it!
at August 01, 2008 No comments: